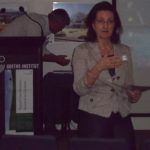 Alumni of AvH and DAAD-funded schemes can enroll in the program, either as research ambassadors who broadcast information regarding opportunities for studying in Germany, present current examples of cooperation, and draw attention to the scholarship programs of the AvH and DAAD at trade exhibits and in their institutions, or as mentors. This latter form of engagement is particularly important in a country as geographically large as Australia.

In the mentoring program, AvH and DAAD alumni support young Australian scientists in defining their professional goals, and offer nonpartisan advice when discussing the various options. In practical terms, this can involve assistance in the preparation of resumes and applications, as well as the planning of further career steps, including the arrangement of appropriate contacts. Mentoring in this initiative does not encompass the supervision of research projects, nor the provision of specialist psychological support.
Alumni of both organizations were again invited to the 2014 RAMP meeting in Sydney, including currently active research ambassadors as well as mentors and alumni interested in similar engagement, but our invitation was also extended to young Australian researchers in all disciplines who are interested in our mentoring program.

The hugely positive response, with more than fifty 50 registrations, confirmed our previous work, and demonstrates the enormous demand for additional support services for young researchers. The number of participants was double that of those who participated in the 2013 RAMP meeting in Melbourne. This year’s activities began on Friday, 28th March, with a visit to the German Film Festival, organized by the local Goethe Institute, at the historic Chauvel Cinema, followed by an opportunity for participants to get to know each other in a social atmosphere. The main conference program commenced on Saturday with the official launching of the new RAMP website (ramp-australia.info). Dr. Darren Webel, who had converted our Google Site design into the professional content management system Drupal and was thus critical in helping establish our website, introduced it to the participants and presented an overview of and users guide to its various functionalities. The previous national RAMP meeting in Melbourne had expressed its interest in such a professional internet presence in order to further strengthen the network. Research ambassadors, mentors and mentees can now register their interest on the website, and this information is directly accessible to the administrators thanks to the integrated database, which facilitates significantly the administrative maintenance of the network, as well as the matching of mentors and mentees. The times are past when such registrations needed to be entered manually into an Excel spreadsheet. This talk was followed by thirteen short presentations by future mentees, who were drawn from fields ranging from literature, language and history to biology and chemistry.

The participants gathered at 8pm for the official dinner in historic Bill & Tonis restaurant. The evening was appreciated by everyone as an opportunity for in-depth discussions of the workshop themes, of the RAMP initiative, and of future possibilities for cooperation. 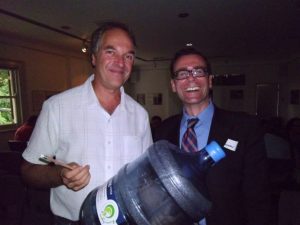 The final event on Sunday allowed time for the presentation of the alumni portal, for initial feedback on the RAMP initiative in general and on the course of the conference in particular, a plenary discussion of the organization of the 2015 RAMP meeting, and finally a concluding speech by the Alumni Association on further planned regional activities of interest to RAMP participants throughout the year. An impromptu picnic represented the informal conclusion of the RAMP meeting, after some of the group had visited the Art Gallery of New South Wales, while others had strolled through the Botanical Gardens.
In the ten days following the launch of the website, there had already been thirty new registrations, and a new Mentoring Pair established.

A German version of the report can be downloaded here as a .pdf file