In the Spirit of Alexander von Humboldt

Following on the traditions of the previous Biennial Meetings of the Australian Association, the 12th Meeting brought together von Humboldt Fellows from all states of Australia and the Australian Capital Territory, for a series of scholarly presentations by some of them, lively discussions and social exchanges from the Friday evening through until early afternoon Sunday. In addition, the recently formed New Zealand Association was represented by four delegates who also presented papers on their recent research, and two of their spouses.

The Meeting opened with a reception hosted by Mr. Alfred Simms-Protz, Chargé d´Affaires a.i. of
Germany, German Embassy, Canberra. Unfortunately, an accident on the tennis court during the previous weekend and subsequent surgery, prevented Mr. Simms-Protz from making the journey to Melbourne personally so the official opening was performed by Ms Inga Heuser, the German Embassy Cultural and Press Officer. Ms Heuser emphasized the important role now played by many of the 23,000 world-wide company of Humboldtianers within their regional associations, whom she described as ambassadors for the promotion of Germany.

The scholarly presentations featured three invited papers on topics highly relevant to the theme for the Meeting. Emeritus Professor Rod Home, History and Philosophy of Science Department, The University of Melbourne, spoke about his recent work on Reconstructing Ferdinand von Müllers Correspondence, describing Müller as Germanys greatest gift to Australia in the 19th Century, on the basis of his dramatic impact on cultural and botanical development in Australian cities, particularly Adelaide and Melbourne, during his lifetime and the consequences since. Professor Gabrielle McMullen, Pro-Vice-Chancellor (Academic Affairs), Australian Catholic University, presented the topic Global Challenges: Global Solutions – The Need for Humboldts Worldview. Gabrielle covered the most topical issues of global inequality caused by poverty, and climate change, challenging her audience to consider the ongoing need for Humboldatian science in order to address these issues properly, in the 21st century. In the invited lecture on Sunday morning, Dr. Tom Darragh, Curator Emeritus, Museum Victoria, on the topic Leichhardt, the Scientist, demonstrated the Humboldatian qualities revealed from his recent detailed translation of the three Australian diaries of Leichhardt, which recorded his explorations and scientific cataloguing of botanical and geological specimens. There is little doubt, as was summarized by Dr. Darragh in his paper, that Leichhardts premature death prevented the proper publication of his extensive scientific work which was to have been entitled The New Holland, and would have resulted in his recognition as the excellent scientist that he was.

The 13 contributed papers could be classified under the physical sciences (8), the biological and medical sciences (4), and the humanities
(1). The representation of presenters was Victoria (6), New South Wales (2), Queensland (1), Tasmania (1), Australian Capital Territory (2) and New Zealand (4).

The programme allowed adequate time for discussion and socialinteraction amongst delegates and associates. The social programme included an informal dinner following the Friday evening session, at Dantes Restaurant in Fitzroy, a bus trip to the Yarra Valley on the Saturday afternoon, where most delegates learned a little about some of the wines for which the Yarra Valley has an international reputation, through two tastings, at De Bortolis and Oakridge wineries, and a Conference Dinner (at the Il Vicolo Courtyard Restaurant, Carlton (a copy of the dinner menu is attached)) at which the courses were interspersed with musical entertainment from the Telemann repertoire presented by An Early Music Consort. In an after-dinner speech, Professor Peter Schwerdtfeger, President, New Zealand Association of von Humboldt Fellows, issued an invitation for the 2009 Biennial Meeting in this region to be held at Massey University in New Zealand. (It should be noted that this invitation was accepted at the Business Meeting of the Australian Association the following morning.)

I must acknowledge Professor Peter Schwerdtfeger, President, AAvHFs, for most of the pictures I have included to illustrate this short report on In the Spir 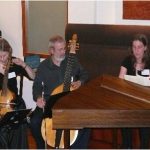 it of Alexander von Humboldt. Thanks are due to my colleagues on the Organizing 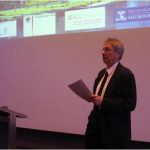 Committee, Professor Gabrielle McMullen, Dr. Gary Bryant and Associate Professor Ian Nicholls. I should also like to acknowledge a Humboldt-Kolleg grant for the meeting from The Alexander von Humboldt Foundation, Bonn, The German Embassy, Canberra, for hosting the Friday evening reception, Australian Catholic University, for the provision of the excellent meeting venue at Mercy Lecture Theatre and technical support staff, and the School of Physics, The University of Melbourne, for the printing services.

A .pdf version of the report can be downloaded here